Why hams are rubbed with lard? 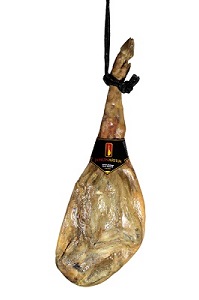 We give you some reasons:

Protect the ham during the curing process

The main aim of lard is to protect the piece during the curing process. The amount of lard used is very low and it is only put in those parts in which the ham is more unprotected.  The amount of skin is different depending on the part of the ham, so an extra protection in order to protect it against illness and irregularities may appear becomes necessary.

During curing process, it is important to protect ham against mosquitos, mites and other illness may appear. Moreover, it is also used to palliate this ham "illness" (in case of having it), making this step basic to get an excellent quality ham.

Depending on the part of ham, the amount of natural skin and fat is different. If the piece will not be covered with lard, the most unprotected zones will cure too fast. This process allows longer curying processes, which will result higher quality and more juicy hams.

This is step is basic to get iberico and serrano high quality hams, as it gives protection and prevention.