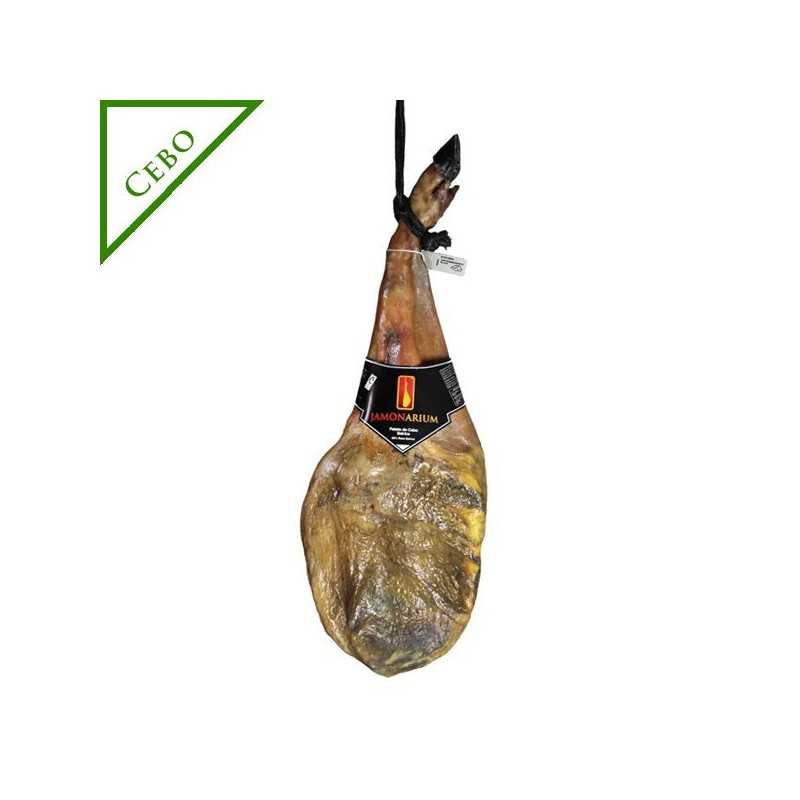 This Cebo Ibérico Shoulder Ham, 50% Iberian Breed has been made in the area of ​​Castilla y León and has more than 18 months of curying time. This pure Iberian piece belongs to the front leg of the pig, which has been fed on natural feedings.

Castilla y León is one of the main producing areas of Iberico de Cebo products thanks to its climate of hot summers and soft winters and its wide expanses of pastures in which the pigs graze. In addition, its fooding gives it that characteristic flavor of Ibérico Cebo Shoulders, with an intense Iberian flavor with fruity touches. Its meat is of a colour from an intense red to pinkish color and its fat, between white and transparent, has a creamy texture and an intense aroma.

It is a product of the highest quality among the Iberico Cebo shoulders and valued worldwide as one of the great gastronomic treasures.

T
Tomaz
Ham is good, bit 5 years cured ham is something you wont regret, its best ham I have ever tried !!!!
n
neil
I have recently received the Cebo Shoulder order and am very disappointed. There so much fat on the leg that it is really uneatable. In addition, the meat I have managed to find is really not very nice. This is not my first order with you but based on this particular shipment it may well be the last. A very unhappy customer.

Jamonarium Reply
Hello Neil, thanks for your opinion. As we have just spoke on the phone we already found a solution for the issue. We always try to select the products in its right point of drying and with the average quantity of fat. However sometime we can mis it, we are not inside of the ham! We keep in contact so you have a top quality product with you very soon. Kind regards.
J
Jeppe
Absolutely wonderful!! ????????
W
Wim
Super product!! Ham is delicious and very tasty! Yummy, yummy...
J
JORGE
Very tasty, but with a lot of fat. Surely 50% fat.
R
Richard
The ham is fantastic flavour and quality and tremendously good value.
L
Lut
a little bit to much **
K
Kathleen
Lovely
R
Richard
A beautiful product
E
Evelina
I ordered *** for my husband. What I can say, is that he eats it every day and plans to order more.
https://www.jamonarium.com/en/whole-iberico-bellota-pata-negra-serrano-ham-shoulder/55-cebo-iberico-shoulder-ham-50-iberian-breed.html 55 Ibérico Cebo Shoulder, 50% Iberian Breed <p>This <strong>Cebo Ibérico Shoulder Ham, 50% Iberian Breed</strong> has been made in the area of ​​Castilla y León and has more than <strong>18 months of curying time</strong>. This pure Iberian piece belongs to the front leg of the pig, which has been fed on <strong>natural feedings.</strong></p> <p><strong>Castilla y León</strong> is one of the main <strong>producing areas of Iberico de Cebo</strong> products thanks to its climate of hot summers and soft winters and its wide expanses of<strong> pastures in which the pigs graze</strong>. In addition, its fooding gives it that characteristic flavor of <strong>Ibérico Cebo Shoulders</strong>, with an <strong>intense Iberian flavor</strong> with fruity touches. Its meat is of a colour from an <strong>intense red</strong> to pinkish color and its fat, between white and transparent, has a <strong>creamy texture and an intense aroma</strong>.</p> <p>It is a product of the <strong>highest quality among the Iberico Cebo shoulders</strong> and valued worldwide as one of the great gastronomic treasures.</p> <p><strong>Origin</strong>: Castilla y León. <a href="https://www.jamonarium.com/en/cms/35/iberico-hams-production-areas">See areas of production of Iberian hams</a>.<br /><strong>Healing</strong>: +18 months<br /><strong>Food</strong>: Natural Feedings (cereals and legumes). <a href="https://www.jamonarium.com/en/cms/7/information-ham-iberico-bellota-serrano-pata-negra">See types of ham</a>.<br /><strong>Consumption</strong>: Cut into small thin slices and serve at room temperature.<br /><strong>Conservation</strong>: <a href="https://www.jamonarium.com/en/cms/25/preservation-consumption-ham-iberico-serrano">See here how to preserve</a> the <strong>Cebo Ibérico Shoulder.</strong></p> <p></p> <div id="formatos" style="text-align:center;border:thin;border-style:solid;"><br /> <p style="text-decoration:underline;"><strong>Buying 50% ibérico Cebo Ham</strong></p> <p>- <a href="https://www.jamonarium.com/en/hams-shoulders-boneless-iberico-bellota-pata-negra-serrano/65-cebo-iberico-shoulder-50-iberian-breed-boneless.html">Boneless</a></p> <p>- <a href="https://www.jamonarium.com/en/sliced-spanish-ham/75-cebo-iberico-shoulder-50-iberian-breed-sliced-100g.html">Sliced (in sachets)</a></p> <p>- <a href="https://www.jamonarium.com/en/gift-hampers/1565-cebo-iberico-shoulder-50-iberian-breed-whole-sliced.html">Whole Sliced</a></p> </div> https://www.jamonarium.com/3688-home_default/cebo-iberico-shoulder-ham-50-iberian-breed.jpg 61.7909 instock 61.7909 61.7909 0 02011-04-12T11:23:38+0200/Home /Home/Our Products/SPANISH HAM /Home/Our Products/SPANISH HAM /Whole with bone /Home/Our Products/Cebo ibérico /Home/Our Products /Home/Promos /Home/Promo NAVIDAD 15% - Cebo65 144 37314.31€/kg 744.7837874