The Iberian ham produced in Spain is famous worldwide thanks to its quality and characteristic flavour. This product is highly valued per important cooks  from all over the world and it is served in some of the best restaurants of the world. Behind each piece of ibérico ham and shoulder, there are some strict requisites should be accomplished,such as minimum curing time, breed purity, feed of the pigs and strict quality controls.

The main producing areas of iberico hams and shoulders are placed at southern and south-western Spain. Those areas should accomplish some specific requisites, as the sort of pastures where pigs are raised, pasture areas, weather, etc. Weather, geographical and orographical characteristics in the production areas are very important for the hams production and drying as those factors are determining to get its characteristic quality.

Iberian ham has very specific characteristics that make it easy to distinguish it from Serrano hams.

2. The meat has a high rate of infiltrated fat in the muscle mass. This may vary depending on how many kilometers they walk looking for food.

3. Thanks to the high percentage of the infiltrated fat in the muscle mass, the meat has an oily texture. This makes the Iberian ham to have such a long and intense flavor.

5. The pastures in which the pigs are raised must have specific conditions in terms of extension of land, types of trees for the pigs to obtain acorns and distance between the watering points.

6. Iberian ham has many health benefits. It is very rich in protein, vitamins B1 and B12 and minerals, as well as good HDL fats that contribute to cardiovascular health and to make cholesterol lower. 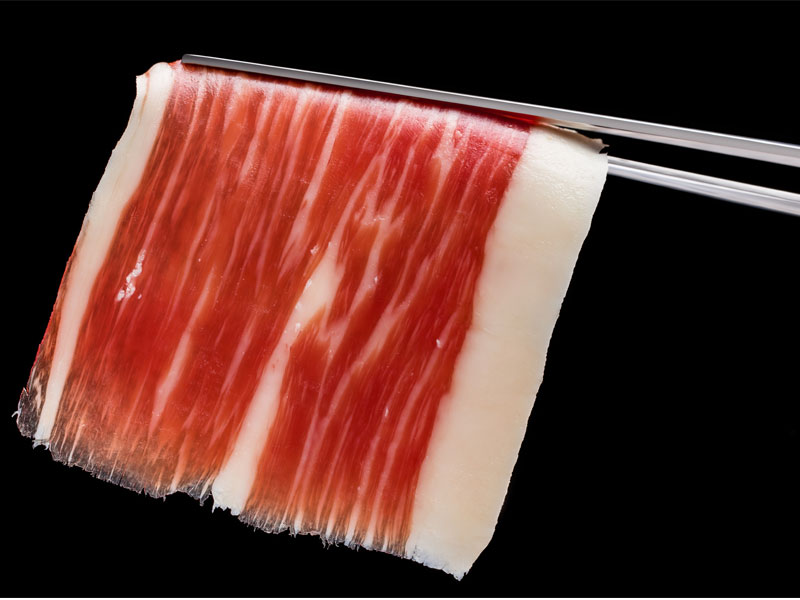 The pastures consist of holm and cork oaks forests, perfect for the Iberian pigs to get into the montanera period and carry out the pig's fattening period. It is in these pastures where the pigs live in freedom until they are slaughtered, and the maturation period begins.

Dehesas are located in the southwestern part of Spain due to the area's continental Mediterranean climate, with hot, dry summers and long, mild winters, making it ideal for grazing Iberian pigs.

Once the pig has been slaughtered, the maturation period of the ham begins. Firstly, the salting period is carried out, in which the hams or shoulders are buried in sea salt, alternating layers of hams with layers of salt. Subsequently, we proceed to the settling phase, which consists of the salt being distributed evenly throughout the piece. This process is carried out in cold rooms at a controlled temperature, although it can also be carried out in natural dryers. Next is the drying phase, which has the same function as the settling phase but always takes place in natural dryers. Lastly, there is the aging phase, in which they finish their drying process naturally, hanging the pieces by weight and type. Thanks to this phase, the organoleptic characteristics of Iberian ham can be obtained.

Learn more about the period of elaboration of the Iberian ham

We find 3 types of Iberian hams according to the feeding they have had during the fattening season. 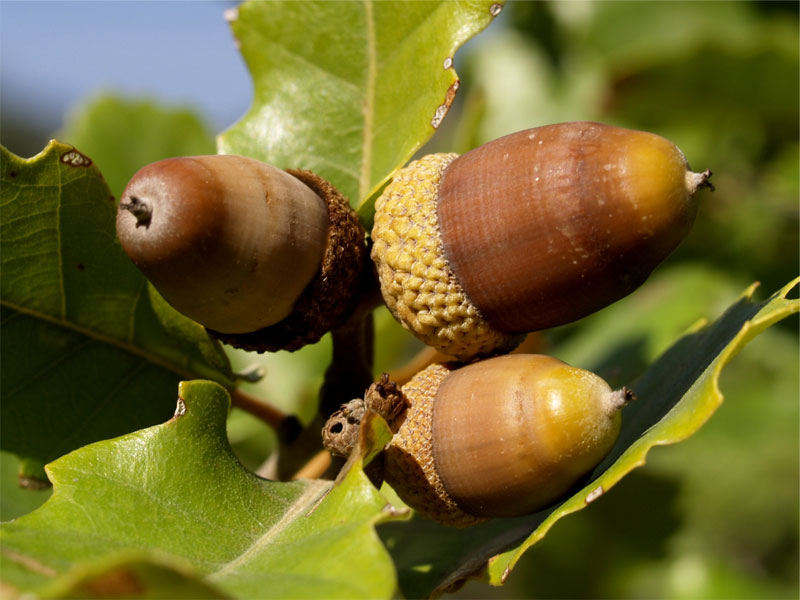 The Pata Negra 100% Iberico Bellota Ham is popularly considered the highest quality Iberico ham. This type of ham comes from 100% pure Iberian pigs whose parents are 100% Iberian. The most characteristic of these hams is the black color of their hoof.

Pata Negra 100% Bellota Iberico ham has a stylized leg and a thin and elongated caña. The meat is purple-pink in color and has a good index of fat infiltrated into the muscle mass, thanks to the long kilometers traveled by the pigs looking for food.

Find out more about the 100% Iberian Bellota Pata Negra Ham

Extremadura is the main producing area of iberico hams and shoulders, main reason why Designation of Origin Dehesa de Extremadura has been created. This is one of the most depopulated areas in Spain and extensive pasture areas, perfect for the iberian pig breeding, consecrated to produce the ibérico bellota ham. The ham Designation of Origin Dehesa de Extremadura is characterised by its sweet and fruity flavour, slightly strong, perfect for slightly intense flavour lovers.

This area has a continental weather, characterised by dry, hot summers with few rainfalls, and long and soft winters, with heaviest rainfalls than in summer. The geography of this area is characterised by its mountain ground placed in Sistema Central, next to Sierra de Gredos, Sierra de Béjar and Sierra de Gata, Sierra Morena and Montes de Toledo. Its average altitude is 400 metres over the sea and abundant rivers, which Tajo and Guadiana are the most important.

About the pasture areas, those are mainly conformed by corks and oaks, distributed along the production area in D.O. Dehesa de Extremadura, which happens to meat with Extremadura. Its ecosystem is considered among the better preserve in Europe as there are different three species and pig breeds, as iberian pig. Grounds are conformed by siliceous materials, mainly formed by granitic rocks, slate and sandstone.

The pastures are placed in Cáceres and Badajoz and they have around a million hectares. Those places are perfect to encourage iberian pig exercise while the pig consume acorns. Thanks to the specificity of the iberian pig breed, the exercise and breed; the fat is infiltrated in the meat, having a juicy lean as a result. Due to its high number of hectares, the exercise of the pig is encouraged, and the infiltrated fat percentage in muscle will be higher. 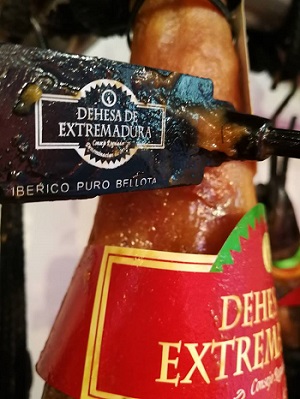 5.2. Salamanca, everything about Guijuelo 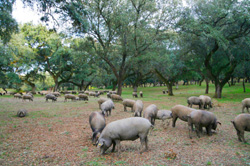 The weather in Salamanca is characterized by being Mediterranean continentalized, as it has very cold winters and very hot and dry summers, perfect for the breeding and cured of the ibérico ham. The precipitations are not abundant and the average temperature varies between 25º and 35º. Geography and orography of the area is characterised by its mountainous landscape, surrounded by Sistema Central, Montes de Toledo and Sierra Morena, contrasting with some plains, valleys and little Sierras. Its average altitude is of 1000 meters over the sea, creating the perfect weather for the drying of the pieces.

Regarding the pasture areas, they are placed in Salamanca, Toledo and Zamora, close to Gredos and Béjar sierras. Hams curying area is placed southwest Salamanca, conformed by 78 municipalities placed at south-western Salamanca. Mediterranean forest groves, mixed with corks and oaks encourage the preservation of Guijuelo's ecosystem. About the ground materials, they are mainly conformed by siliceous rocks, made by granitic, slates and sandstone rocks.

Guijuelo is placed in Salamanca. There are numerous companies of iberian products. Few years ago, this industry become one of the most important in Guijuelo, being the 65% of the working population there.

Our hams from Guijuelo

Jabugo is placed in Huelva and the famous "Jamón de Jabugo" is produced there, on of the most important in Spain. Traditionally, ibérico ham was sometime wrongly named as "Jamon de Jabugo" due to its high popularity. This ham used to be protected by the D.O. Huelva, becomed D.O. Jabugo in 2017. Designation of Origin of Jabugo's ham is characterized per its strong flavour and the less fruity among ibérico bellota hams. 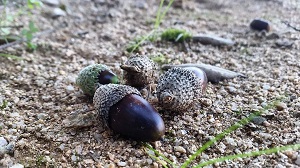 Its weather is characterised per its hot summers and Easter and winter with heavy rainfalls, giving more balance between temperatures and humidity of drying places and cellars. Geography and orography are characterised by rough mid-mountain landscape and average altitude of 572 metres over the sea.

Elaboration area and its characteristics

The elaboration area is formed by 31 towns inside La Sierra, at north-western Huelva. The flora of the area is characterised by being leafy, mainly conformed by corks, oaks, pines and chestnut groves, among others. In Huelva is our most famous Designation of Origin worldwide, even being confused with ibérico ham. This Designation of Origin gives a great recognition to ibérico hams in Jabugo, as well as a great recognition of pieces, guaranteeing its quality.

5.4. Los Pedroches, the jewel of Cordoba

Our hams from Los Pedroches

Its Mediterranean weather and southern sub-plateau, with cold winters and hot summers. Its average temperature is around 18º-19º with frequent heavy rainfalls, which contributes to the drying process of the pieces.

About the production area of Los Pedroches, it is placed in Córdoba, joining Ademuz, Hornachuelos, Posadas, Obejo, Montoro, Villaharta and Villaviciosa de Córdoba. 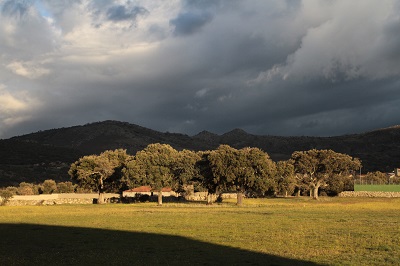