Even if we speak about hams, the first one cames out to our minds is the Spanish ibérico de bellota. Anyway, there are several types of ham around the world are worth knowing. Among those hams we find french hams. They are not as worldwidely popular as Spanish hams, but they of a good quality and famous in France too.

In France, hams are classified in 3 groups: Jambon Sec Supérieur, Jambon sec and Jambon Cru. In the first group, we find those whose minimum weight is 8.5 kg and they are 210 days cured. The most famous ham of this group is Bigorra ham, very appreciated in France and coming from a very antique pig breed, the Gascon, considered first cousin of Spanish iberian pig due to their similarities but more hairy. This ham is very similar to the ibérico de bellota, but its flavour is more salty.

In Jambon Sec group we find those hams which weighs more than 7.5 kg and the curying period is longer than 130 days. It is important to highlight the famous Bayona and Ardennes hams, the only ones having PGI. We also want to highlight Savoie, Auvergne, Laucaune and Najac hams.

At the end, there are Jambon Cru cathegory. Those hams minimum weight is 6.5 kg and their production is similar to Jambon Sec, but they don't have minimum maturation period. As a example, we find Vendée and Alsacia hams, the last named smoked and very popular. 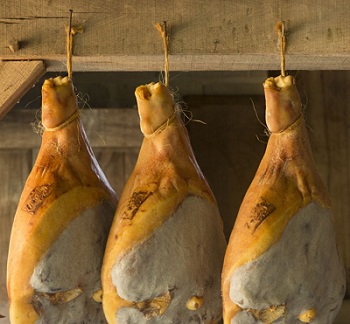 If we refer to french hams, we should name Bayona's ham (Jambon de Bayonne) as it is the most consumed in France. It has PGI from 1998, so they should accomplish some requirements to be considered as Bayona ham.  Hams should come from pigs in the south-west France, more precisely from Adour's basin. Moreover, the feed of the pig should be conformed 60% by cereals. The salt used in the salting process should come from Pays de l'Adour salines and its cutying should be done inside Azour's area (area conformed by Atlantic Pyrenees, Hautes Pyrenees, Landes and Bergs) during 7 months minimum.

This ham is easily identified thanks to the Basque cross ("Lauburu") branded on the skin. Normally it is presented without hoof and its colours are red tones as ground pepper has been added during the cured period to empower its flavour. Its flavour is more sweet than ibérico ham, so it marinates with red, soft and dessert wines.

The history of the Jamón of Bayonne is very well-known. According to the legend, in the 14th century Gaston Fébus injured a wild boar which gor to escape during one of his hunting sessions. Months later, a group of hunters found it drowned in a salted water font in Salies-De-Béarn, perfectly preserved. The salting of Adour's basin has been discovered, area of production of Bayona hams.

Another curiosity of this ham is the market done in his honor in Bayona during easter, where models from traders may be boughts. The market is done since 1462.