We go step by step: If an Iberian ham has fat, it is a good sign. And, precisely, one of the main characteristics of this food is the fat infiltration in lean meat, (small white veins) known as intramuscular fat. This will be very tasty, aromatic and healthy (rich in oleic acids) when it comes from animals grazed in the field, walking several kilometers a day in search of food: pastures and acorns (the main food of the Iberian pig during the montanera). 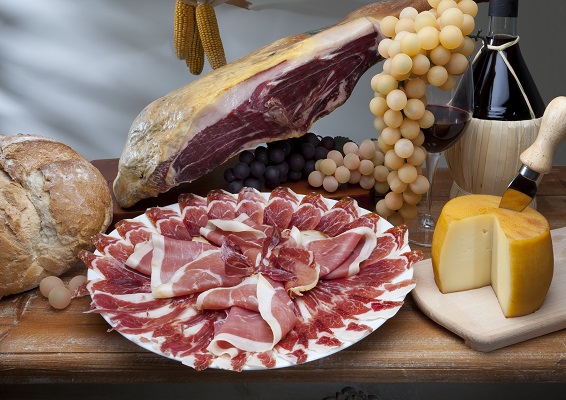 Knowing this, we must learn to differentiate between types of fat. Non-pure Iberian pigs distribute intramuscular fat differently than pure Iberian pigs do. In pure Iberian pigs the structure of the fat will be concentrated mainly in the outface part of the muscle and in very fine lines that will cross the lean part distributed among the meat, which is known as infiltration. Even so, when you start slicing your Iberian Bellota ham, it will be quite common for you to find a high percentage of fat, between 40-45%, to which we are not use to and the reasons are the following:

Breed: Since the law was changed, the only hams can be called Pata Negra are those coming from 100% Iberian pigs. Prior to this law, it was common to mix pure iberian pigs with mixed pigs, and as a result, the hams that were obtained had less intramuscular fat. That is why we are used to seeing less fat in the ham, but the reality is that pure Iberian pigs have an important concentration of fat on the outside of the muscle and very fine intramuscular veins in the lean part. Therefore, it will be perfectly normal to find fat when starting to cut our Iberian Bellota ham.

Curing: We use the same argument than above. In the last quarter of the twentieth century, there was no legislation specifying what type of ham should be specifically designated as Pata Negra Iberian Ham. The most common was to consume mostly serrano ham (from white pigs) fed with feedings or Iberian ham from mixed pigs. It was thought the fat was not healthy; the more lean meat content, the better. And we already know, the higher the lean meat content, the less curing period.

When should we consider that it has “an excess of fat”?

We will be talking about an excess of fat if the yield is less than 50% in hams and 40% in shoulders. In percentage it may seem that we are wasting more than half of our ham, but it is similar to the use of other products for daily consumption such as sole (40%), mussels (35%) or nuts (45%) .

So, is it better to choose a large ham?

Well, the truth is that larger the ham is, the greater proportion of meat, and this is because the weight of bone, hoof, skin and outer fat is practically the same in large and small hams. The largest pieces are from pigs that have gained more weight, but their skeleton remains very similar. In this case, you must give special attention to the feeding followed by the animal and to avoid an artificial fattening.

We hope we have been helpful. As always, see you in the next post!