Sometimes, we don't know how to preserve our ham or shoulder ham sliced with knife in order to preserve its aroma and main properties. The question is: How can we preserve a portion of ham as already sliced during some days?

There are different theories about how to preserve ham slices, but it is important to look for practicality and comfort to preserve them. Below some useful guidelines to enjoy your ham as recently cutted: 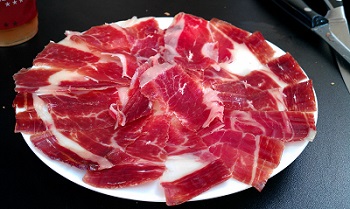 How to keep your ham slices?

If it is not very hot (like 15-20 ºC), you can keep it outside the fridge as it will better preserve its aroma and texture. If it is hot, the best thing to do is to keep it in the fridge in order no to overdry it up.

In both cases, we will protect the slices as follows:

Can we freeze our ham slices?

Actually we can do it. If you want to preserve them during a long time, this might be an option, but it has some inconvenients. This may modify a bit the ham aromes due to water infiltrations on the fiber slices.

The better way to preserve them in the freezer will be in hermetic freezer bags. It is very important to note that, in case of freezing them, the defrozing process would be as slow as possible in the fridge. Thus we will get the ham preserves as much flavour as possible.

Nothing compares to ham already cutted, so it is important to preserve it in good conditions for those who are ham lovers. We wish you enjoy it!