Why are hams hanged? 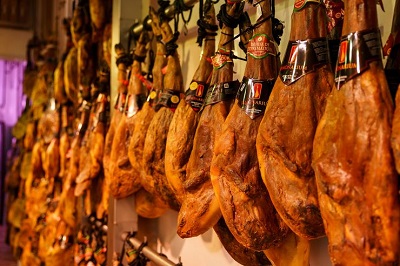 To know the origin of this custom, we must deepen our history. It was between 10th and 14th centuries, when, even there were no geographical boundaries between Spain and Portugal. At that time, in the Iberian Peninsula lived together, Moors (Muslims settled in the southern part of the peninsula), Christians and Jews. But after the Christian Reconquest, this community would begin to implant its customs throughout the kingdom.

The Moors and the Jews, were expelled or converted. Those who stayed and decided to hide their religion, as Claudia Roden tells in her book "The food of Spain", would have started cooking pork in their homes, using lard instead of oil, and they would even come to hang a ham in the lobby of his house. Whatever was necessary to demonstrate their Christianity and avoid the risk of being persecuted by the dreaded Inquisition. We also know that some establishments hung the piece to record that products from pork were sold there.

Today it remains a being the hallmark of sausage shops. Interesting, right?

Now, you know a little more, the story behind a hung ham leg.